Beta-peptides have been designed to mimic natural host-defense peptides. Unfortunately, very little is known about the molecular mechanism of action of these materials.  During the past year Dr. Ortiz-Bermúdez and her research group have been conducting experiments in collaboration with Dr. Sean Palecek, from the Department of Chemical and Biological Engineering at the UW-Madison, to elucidate the mechanisms of action of antifungal beta-peptides.  This project focuses on a genetic approach involving the use of a Saccharomyces cerevisiae strain SPY760 exposed to a random gene mutagenesis with mini-Tn3::LEU2 transposon and a non-mutagenized S. cerevisiae strain SKY760 to identify the molecular response of a yeast cell upon exposure to beta-peptides.  Screening of beta-peptide resistant mutants revealed several genes; of special interest is the Hsp 33p gene. This gene belongs to a family of heat shock proteins expressed particularly during oxidative stress. This finding is consistent with time-lapse experiments of yeasts exposed to both beta-foldamer and polymer. These experiments (Figure 1) show an enlargement and subsequent rupture of the yeast vacuole, which suggests increased oxidative damage that may have been the result of osmolality changes presumably caused by cell membrane rupture (one of the favored mechanisms of action). This is the first time-lapse experiment done with artificial peptides and yeast. These types of experiments promise to complement our genetic approach to elucidate the mechanism of action of beta-peptides. 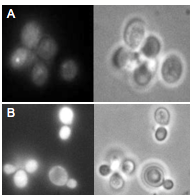 Figure 1. Preliminary studies showing that beta-peptides (32 µg/µl) allow the diffusion of the high- molecular weight dye Sytox Green across the cell membrane (panel A). In addition, rhodamine-labeled poly-β-peptide (100 µg/µl) gets incorporated into a yeast cell (panel B). The time-lapse fluorescence experiments were performed over a 2-hour period taking pictures every 0.5 psec. The experiment was conducted by Kenneth Barns from Dr. James Weisshaar’s laboratory in the Chemistry Department at UW-Madison. Arrow points at enlarged vacuole.