Numerical simulations of the deformation of a droplet in viscous fluid under shear flow are performed with the Lattice Boltzmann method (LBM)  based on the Cahn-Hilliard diffuse interface approach.  The Degree of confinement between two parallel walls, which is defined as the ration between drop diameter 2R and the wall separation H and can play an important role and affect the dynamics of droplet deformation, is studied by decreasing the distance between the walls.  A comparison between experimental, Boundary Integral Method and the LBM was performed at different capillary numbers.  A good agreement between the results of LBM, BIM and experimental images is found for all three capillary number.  It was also seen that for highly confined walls, with increasing the viscosity ration (µdrop/µmatrix) droplets are prevented from rotating in shear flow, which leads to a larger deformation. 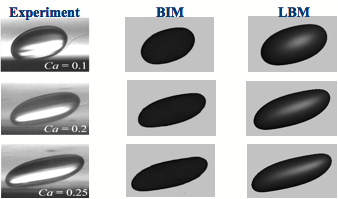 Steady state shapes of a conﬁned droplet with a degree of conﬁnement of 0.8 at different capillary numbers 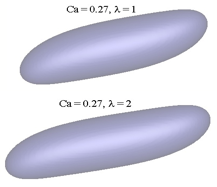