Outcome: In collaboration with experimental studies at Princeton University we have carried out ab initio calculations to examine the effect of pressure on the topological phase diagram of Pb1-xSnxTe. The calculations reveal that the ferroelectric polarization, which breaks crystal inversion symmetry, induces a Weyl semimetallic state separating the normal insulator and topological crystalline insulator phases. The metallic phase features pairs of Weyl nodes of opposite chiralities which persist over a finite pressure range. Hence the metallic phase is protected since the Weyl nodes cannot be removed except by mutual annihilation which occurs at higher pressure.

Impact: The picture of how a gap closes in a semiconductor has been recently radically transformed by topological concepts. Instead of the gap closing and immediately reopening, we predict that in the absence of inversion symmetry, a topological metallic phase protected by Weyl nodes persists over a finite range of pressure.

Explanation: The ferroelectric polarization gives rise to a topological phase transition from a normal insulator to a Weyl semimetal to a topological crystalline insulator under external pressure. The twelve Weyl nodes trace out elliptical orbits with increasing pressure and eventually annihilate pairwise at the higher critical pressure. We predict that the number of Weyl points can be tuned by an external magnetic field. 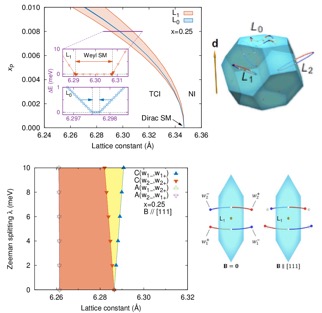