UPRM PREM Students Did It Again

Daniel Páez is a UPRM Mechanical Engineering MS student working under the guidance of Prof. Rubén Díaz; his work is supported by the Puerto Rico Institute of Functional Nanomaterials. Ninoshka Cantres (UPRM Chemical Engineering undergraduate), Nayomi Plaza (UPRM Mechanical undergraduate), and Alexandra Cintrón and Víctor Martínez (both UPRM Industrial Engineering undergraduates) have been directly supported by PREM. Nayomi Plaza and Víctor Martínez are also recipients of the Puerto Rico Louis Stokes Alliance for Minority Participation. This is the second year in a row in which Alexandra won the First Prize in the EPD division of this competition. Other PREM students co-authoring the winning posters were: Ruth G. I. Hidalgo (2006 TMS LMD Scholar and Bridge-to-Doctorate fellowship holder), José Vázquez and Carlos Báez (both 2007 TMS Poster Contest winners). Of all the 12 awards available, UPRM students received 4, i.e. 33%. In 2007, PREM students won two, while in 2008 UPRM PREM students received three. 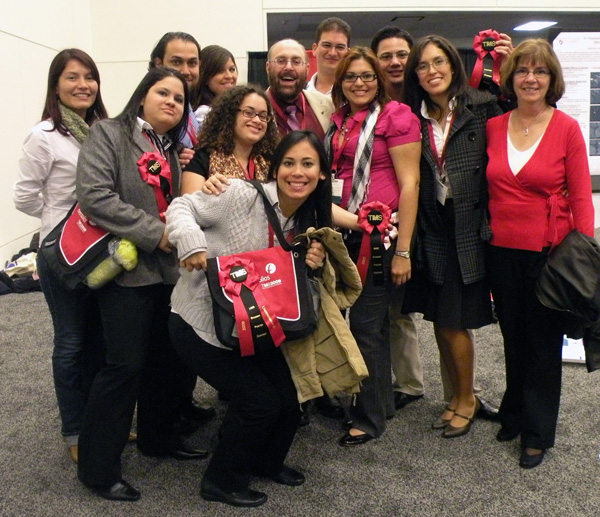 The UPRM team waggle the four ribbons in celebration and are joined by Dr. Robert Shull and his wife. Dr. Shull (NIST Magnetic Materials Group Leader) was the 2007 TMS President and served in the TMS Board of Directors.

The large UPRM delegation shown below was joined by Andrew Fairbrother (third from left in the back row), from New Mexico Tech, and 2008 UPRM REU participant and Z. Humberto Melgarejo, UW PREM doctoral student (far right). The travel of the group was made possible not only by UPRM PREM support but also by grants and donations from TMS, the PR LSAMP, the PRSGC, BP, Raytheon, and the NASA/MUST program. Important travel funds were provided by UPRM Dean of Engineering, Dr. Ramón E. Vásquez Espinoza, a prime supporter of PREM and the Chapter. 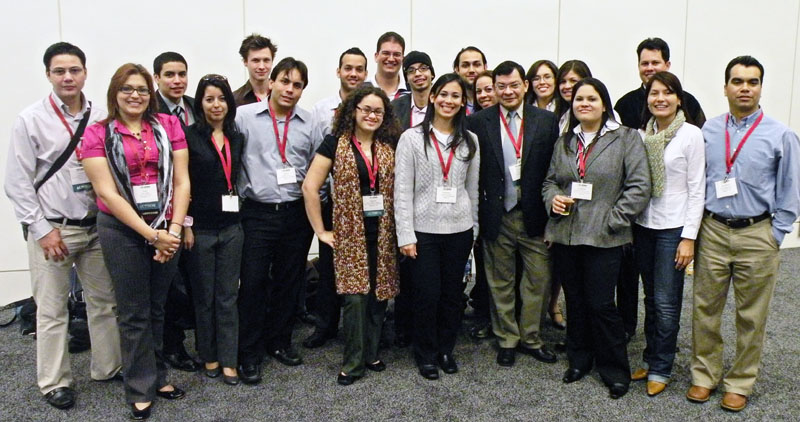 These achievements crown a fruitful 2008-2009 Academic Year for the Mayagüez Material Advantage Chapter. Founded in 2004 under the auspice of UPRM PREM the group received the 2008 Chapter of Excellence by the national organization. The award was officially conferred during the Materials Science & Technology meeting held in October in Pittsburgh.

The Chapter outstanding performance was praised by the 2008 TMS President Dr. Diran Apelian (on the left photograph). He visited the Mayagüez campus in early February 2009 to meet with the Material Advantage students and UPRM faculty. Other individual achievements of Material Advantage/PREM students were: