During the 2008 Sigma Xi Annual Meeting and Student Research Conference held in Washington, DC on November 20-23, 2008 UPRM PREM student Ronald Carrasquillo (Chemical Engineering) presented the poster titled "Development of an Alternative Aluminum Matrix Composite for Bearing Applications," which was co-authored by undergraduate students Roberto Rivera (Chemical Engineering) and Yarimar Martínez (Industrial Engineering), and graduate student Tunde Adelakin (Mechanical Engineering). Their poster participated in the Student Poster Competition and received the Superior Award in the Engineering category along with the works by Shiv Gaglani (Harvard University) and Faisal Reza (Duke University). The award consisted of a diploma, a medal and cash prize.

For this research project, Ronald Carrasquillo (in the photograph below with the winning poster) and his mentor, Dr. O. Marcelo Suárez (UPRM PREM PI), had received a competitive Grants-in-Aid of Research award from the Sigma Xi Honor Research Society in May 2008.

In this project, Al-Sn-based composites reinforced with AlB2 dispersoids are proposed as substitutes for commonly used Al-Sn-Si bearing alloys because of the superior wear strength observed in the new composite. The study is expected to be submitted for publication in March 2009. 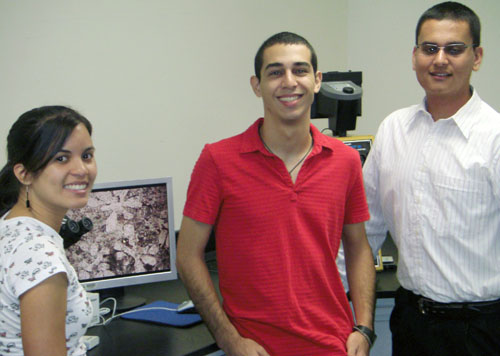 Yarymar Martínez (left), Ronald Carrasquillo (center) and Roberto Rivera (right) working in the UPRM characterization laboratory where most of this work was carried out.

Ronald joined PREM in 2007, while Yarymar participated as volunteer during the Fall 2008 semester in Dr. Suárez's research group. Roberto is supported with a scholarship from the Puerto Rico Louis Stokes Alliance for Minority Program to work under the guidance of Dr. Suárez.