In topological insulators (TI) there is conduction by the surface Rashba states and inside of the material. A group lead by Tito Huber of Howard  University and the PREM, has demonstrated surface state conduction in Bi nanowires. In wires, surface conduction becomes dominant after it undergoes a semimetal-semiconductor transition driven by quantum confinement for diameters close to 50 nm.

Topological insulator behavior consisting of ultrahigh mobilities and enhanced thermopower has been predicted of surface states. For Bi nanowires, the surface electrons have high mobilities, exceeding 2(m2)/(V sec), two thirds of that for graphene, and contribute strongly to the thermopower, dominating for temperatures T< 100 K. The surface thermopower is - 1.2 T microvolt/(K2), a value consistent with theory, raising the prospect of developing nanoscale thermoelectrics based on surface bands. This work was also supported by Army Research Office, materials and has been accepted for publication in Phys. Rev. B and can be accessed at
http://arxiv.com/abs/1103.1054 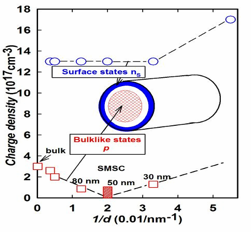 Charge density as a function of the nanowire inverse diameter, showing how quantum confinement turns Bi wires into a bulk insulator 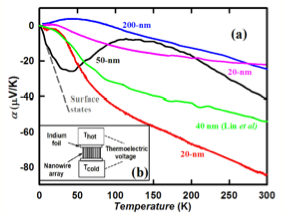 Bi nanowire thermopower a as a function of temperature T.